EGADE Business School Professor receives distinction from UANL for his contributions to the private, public, and academic sectors in support of the economic and social well-being of the country

This distinction recognizes his contribution to the private, public, and academic sectors in support of Mexico's economic and social well-being.

In his acceptance message, Elizondo Almaguer warned that, although extreme poverty has decreased worldwide by more than half in the last 30 years, millions of human beings still live in conditions of vulnerability and marginalization, and income distribution inequality has grown.

"(These challenges) need rational, vigorous responses. Science offers some solutions, others must be sought in more efficient public policies, and still others, the most important, will have to be found in the field of philosophy," said the recipient. 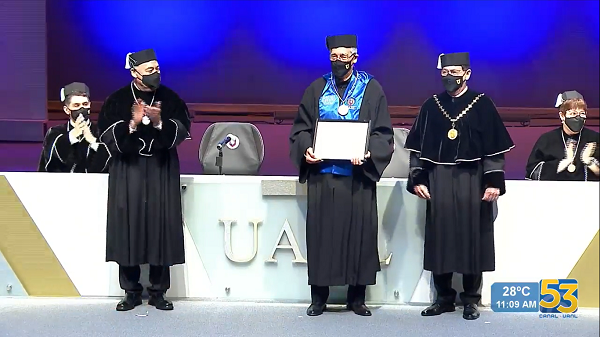 He was appointed Deputy Governor of Banco de México in the administration of President Ernesto Zedillo and ratified by President Vicente Fox, where he participated in the design and management of a monetary policy focused on stability.

In the academic field, he was a founder and Director of the Graduate School of the UANL Faculty of Economics.

He is currently a professor at UANL and EGADE Business School and a visiting researcher at the Institute for Latin American Studies at the University of Texas.

In addition, he participates as a columnist on economic and financial issues for the newspapers El Norte and Reforma. He belongs to various advisory councils in the public and private sectors.

The Doctor Honoris Causa was bestowed upon Everardo Elizondo on September 10th in a solemn session of the UANL University Council, chaired by Rogelio Garza Rivera, Rector of the Institution.

In the same ceremony, the Minister of the Supreme Court of Justice of the Nation, Ana Margarita Ríos Farjat; the U.S. physicist, Bennett B. Goldberg; and the Mexican academic, Francisco Javier Marmolejo Cervantes, were also invested Doctor Honoris Causa.